You can use this service to retrieve daily, monthly or annual statistics for a USGS site and parameter.

. This way you will receive an announcement when changes are made to this web service, or if it there are significant problems with the service.

How the service works

With hundreds of thousands of qualifying sites across the nation, the amount of data available is very large. No one user is allowed to download all of the data with a single call. The service has consequently been engineered to facilitate common mass queries, defaulting to returning a narrower set of data. You are encouraged to make your queries efficient too, mindful that many others need access to the data at the same time. Always specify the minimum amount of data you need in your request, using built in filters and date ranges to the maximum extent possible.

Probably the best way to learn how to use the service is to try it out!

The USGS provides this tool that allows you to generate syntactically correct calls to the service. You can even run the query live in your browser. When you have perfected your query you can copy and paste the URL into your application to get the precise data you need.

is supported by this service. Use of gzip compression may markedly speed up acquisition of data, particularly on large queries. It also is a more efficient use of USGS servers, so we appreciate when you are thoughtful enough to use it. Whether you can receive the data in gzip compressed formats depends on the capabilities of your client. Web browsers support gzip compression natively, but most regular users will use specialized utility programs like wget

to acquire data. If you can handle gzip compression, please place the following string into your HTTP request headers: Accept-Encoding: gzip, compress

gzip files are typically returned as a file with a .gz file suffix unless you instruct your program to uncompress it. See the gzip man page

for instructions on uncompressing .gz files.

Monthly statistics are calculations based on a month and year. It answers questions like "For February 1999 what was the mean streamflow?" Using mean as an example, you will get a mean (average) of all the daily means for the site for February 1999.

Sometimes gages may be down or inaccessible due to equipment malfunctions or other issues. You have the option to calculate monthly or annual statistics if there is missing data using the missingData argument. Otherwise there must be a complete set of approved statistics for the type of statistic wanted to serve that statistic. If it cannot be served, the value is generally left blank or null.

Currently only tab-delimited data can be downloaded using this service. XML and JSON outputs will be added in a subsequent release. Regardless of the format downloaded, only the way it is encoded and marked up differs.

To illustrate daily statistics, the following tab-delimited (RDB) format query was imported into MS Excel and formatted for reading:

This query returns default statistics for site 01646500, at the Little Falls Pumping Station on the Potomac River, specifically streamflow or discharge. The site number is identified in Column B and the parameter being measured (streamflow) is identified in column C (00060). Row 1 contains column names and Row 2 contains some information about the type of data in the column. For example, 5s means expect a string (set of characters) not to exceed 5 characters. Data begin with Row 3.

Column F indicates the month of the statistic and column G indicates the day in the month of the statistic. So Row 3 contains statistics for January 1st across the entire period of record, which in this case was from the beginning of water year 1931 (October 1, 1930) to end of water year 2013 (September 30, 2013), as indicated by Columns H and I. The last row, Row 21, contains statistics for December 31. Many rows were removed for readability.

Mean is the same as average. So Cell O3 indicates that the average streamflow for this site on January 1st is 13,400 cubic feet per second across more than eighty years of record.

The "loc_web_ds" column (Column D) is normally blank. Some sites may measure from different locations, such as the right bank and the left bank of a river. If this site has multiple measurement locations, you will see text here describing the site location. The "dd_nu" column (Column E) indicates the Data Descriptor

associated with streamflow at this site. Generally, this is of interest only to USGS scientists and can be ignored.

What is "count_nu"? In this case it represents the 83 years of statistics, or its period of record in years. This will stay the same except in the peculiar case of February 29. Since this is recorded only every four years, the number is smaller, 21 in this case.

To illustrate monthly statistics, the following tab-delimited (RDB) format query was imported into MS Excel and formatted for reading:

Cell H3 tells us that there was a mean streamflow of 13,090 cubic feet per second for this site for March 1930. All the daily means were first retrieved for March 1930, then a mean of those values was calculated. Monthly statistics are rounded using these rounding rules.

To illustrate annual statistics, the following tab-delimited (RDB) format query was imported into MS Excel and formatted for reading:

Since it is not specified, calendar year statistics are given. Note that the argument &statYearType=water could have been added to created statistics based on water year, not calendar year. Water years begin October 1 of the year before the calendar year, and end September 30 of the current year. Note that there will be one data row for each year in the period of interest beginning with the earliest year of the period of interest. Since only a mean statistics were requested, no percentile, maximum or minimum statistics are in the output. If specified, statType is ignored. 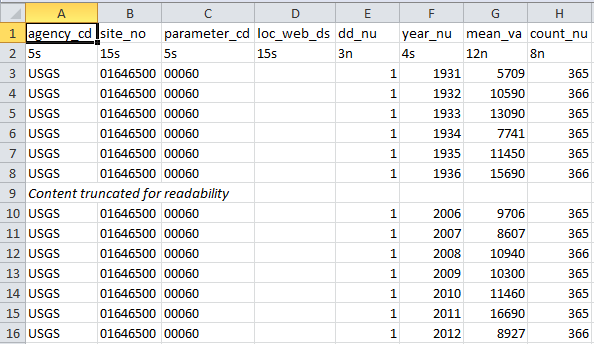 Cell G3 tells us that the mean streamflow for 1931 was 5,709 cubic feet per second. All the daily values were fetched for the calendar year and the mean of those value was calculated. Annual statistics are rounded using these rounding rules.

Since this system uses Hypertext Transfer Protocol (HTTP), any application errors are reported in the HTTP headers, which are normally not seen. This means that when writing applications, when you get a response it is important to first examine the HTTP status code

that is returned in the HTTP response. The application server will return the error code along with a message describing the error in the event there is a problem. Programmers should always check the HTTP response code and if not a 200 handle the response as an exception. Among the status codes you may see:

Using the Web Service with Adobe Flex or the Flex API

requires our server have a crossdomain.xml file

CORS permits browser-based asynchronous access to the service even though content originates from a server different than the one serving the web page. Otherwise the browser's security controls would not allow content to come from USGS servers. Most, but not all browsers, support CORS. Some frameworks, like jQuery through the Ajax

The URL must always be in this format:

where <arguments> are one or more HTTP GET parameter names and values based on the information below.

You specify the arguments that go in <arguments>.

Here is an example of a valid URL that should return data:

URL argument names and argument values can be in upper, lower or mixed case. They will all be handled correctly. All of the following will yield the same result:

The following conventions are used below to document URL argument values:

In the above example, these would be the allowed legal values:

Want to only query one site? Use site (or sites) as your major filter, and put only one site number in the list! Example:

Unlike the other services on this site, at this time the statistics service is limited to accepting a list of up to ten site numbers only. At least one site number must be supplied. Further refine the query with minor filters, if needed.

Annual statistic can be calculated against a calendar year or water year. You can select the type of year you want with the statYearType parameter.

Dates are specified in an ISO-8601 date format. You can use the format YYYY for years, YYYY-MM for months and YYYY-MM-DD for days. Use the startDt and endDt URL arguments when you need to specify period of interest dates that are less than the period of record. startDt is the start date, month or year. endDt is the end date, month or year. endDt must always be equal to or greater than startDt.

Defaults for start and end dates

Daily, monthly and annual statistics all depend on daily values, so daily values must exist and they must be approved. Moreover, they will only exist if a site has been recording statistics for the entire day. This helps explain the logic on defaults for dates with this service.

Note that you can ask for annual and monthly statistics despite missing data within the month or year with the missingData argument. In some cases this will change default behavior if there are enough partial values to create a statistic for a start or end month.

Regardless of the statistics type wanted (daily, monthly or annual), statistics are computed against the period of interest by using startDt and endDt arguments. If not specified, the start and end dates for the period of record are used.

You can specify a range shorter or longer than a site's period of record using the startDt and endDt arguments.

Additional filters can be applied after specifying a major filter. This further reduces the set of expected results. Users are encouraged to use minor filters because it allows more efficient use of this service. Note: since only site numbers can be supplied as a major filter at this time, minor filters other than parameter code have limited usefulness.

Here is a simple example using the popular PHP

scripting language that retrieves daily streamflow (discharge) statistics for site number 01646500 in a tab-delimited format and transforms the data into HTML for presentation on a web page.

Please provide any feedback you have on this service using this form.